Sister Marta Wiecka was only thirty years old when she died. But in that short time she achieved great sanctity. Her whole life as a Daughter of Charity was dedicated to serving the sick in a Vincentian spirit of humility, simplicity and charity.

Marta Wiecka was born 12 January 1874 in Nowy Wiec, the administrative district of Kościerzyna in the region of Pomorze. She was the third of 13 children in the family of a wealthy landowner Marcello Wiecki and his wife Paolina Kamrowska Wiecka. Marta was baptized six days after her birth on 18 January 1874, in the parish church of Szczodrowo.

Since 1772 a large part of Poland was divided and occupied by several of its more powerful neighboring states. The region were the Wiecka family lived was under the control of Prussia, which tried to suppress the national and Catholic identity of Poland through a program ofKulturkampf (fight for culture). As part of Kulturkampf, schools were forbidden to teach the Polish language, Polish history, and the Catholic faith. The Wiecka family, like many others, was staunchly Catholic and Polish. So Marta learned about her Polish identity and her Catholic faith from her family. She was nourished by family prayer in common, spiritual reading and studies of each Sunday’s homily.

The Wiecka family had a great devotion to Mary, the Mother of God. When Marta was two years old she became very ill. After medical intervention failed, the Wiecka family turned to Mary, the Mother of God of Piseczno to intercede on behalf of their little Marta. Miraculously, she was healed. All her life Marta had a great love for the Blessed Mother and often turned to her for help. And it seems that Mary never disappointed her.

As a child Marta cheerfully help her mother with domestic chores. Neighbors admired the child for her prayerfulness, good character, kindness and optimism which she shared with those around her. Family and friends knew that Marta was an ardent admirer of Saint John Nepomucen. They often saw her standing, immersed in prayer, in front of a wayside shrine to the saint. Throughout her life she cherished the prayer to St. John Nepomucen which she had learned as a child from the parish priest.

On 3 October 1866 Marta made her first Holy Communion. From then on, Jesus became the center of her life. Whenever she had a chance to attend Mass, she never hesitated to walk the 12 kilometers to the parish church in Skarszewy. At home she often spent time in prayer. During this period her mother was often ill. So it fell to Marta to take care of her younger siblings who called her their ‶second mum.”

When Marta was sixteen she decided to become a Daughter of Charity of St. Vincent de Paul. But when she visited the Daughters of Charity in the nearby city of Chelmo, she learned to her disappointment that she was too young to enter.

Two years later Marta tried once again to join the Daughters of Charity, this time with her friend Monika Gdaniec. Because the Prussian government restricted the number of aspirants a religious community in Chelmo could accept, Marta and her friend approached the Daughters of Charity in Krakow. They were accepted. So at the age of 18 Marta left her beloved family to begin her life as a Daughter of Charity.

On 26 April 1892 Marta was accepted as a postulant at the Provincial House of the Daughters of Charity at number 8 Warszawska Street in Krakow. Her next stage of formation began a few months later on 12 August when she entered the Seminary (novitiate). Over the next eight months, she learned the spirit of the Daughters of Charity which would guide the rest of her life.

On 12 April 1893 Sr. Marta received the habit of the Daughters of Charity and was sent on her first mission to a hospital in Lviv. Once there she quickly gained the reputation as a Sister who loved her patients and serve them with great devotion.

A year and a half later on 15 November 1894, she was missioned again to a hospital in Podhajce. Here for the next five years she tirelessly served the sick as a good nurse and a faithful Daughter of Charity.

On 15 August 1897 she made her first vows as a Daughter of Charity, sealing her commitment to serve God in the person of the poorest of the poor.

Under the burden of accusation

In 1899 Sr. Marta was missioned to the Daughters of Charity house in Bochnia. The Sister Servant (local superior) of this house was Sr. Maria Chabło, who in time would become a very important advocate for Sr. Marta.

Around this time Sr. Marta had a vision of our Lord Jesus on the cross. He urged her to patiently endure adversity and promised that one day she would come to Him. This experience increased Sr. Marta’s dedication to her ministry and inspired in her a longing for Heaven.

Not long after the vision of our Lord, the adversity which it predicted appeared. A disturbed man, recently released from the hospital where Sr. Marta ministered, began telling people that she was pregnant after having an affair with one of her patients – a student who was a nephew of the parish priest. Faced with this obscured accusation Sr. Marta still had to live and work surrounded by libelous gossip. As a matter of principle the Sister Servant of the house Sr Maria sought to keep Sr Marta in Bohnia in order to prove her innocence in time. Throughout this trying time Sr Marta never stopped serving the sick with her usual gentleness and care. She bore this insult with serene patience relying all the while entirely on God.

The Charism of Sr. Marta

After the situation in Bohnia fade away, Sr. Marta was sent to serve at the hospital in the town of Śniatyn. It was not long before her reputation for holiness and wisdom attracted the attention of the local priest. Soon he began sending to Sr. Marta parishioners with problems and spiritual crises. In her these people found the help they needed both spiritually and physically. She did all of this while still faithfully fulfilled her hospital duties.

Sister Marta loved her vocation. She exuded joy and satisfaction while serving the sick. Always smiling, full of patience and goodness, she brought spiritual as well as physical relief to the suffering. She found time to teach the sick about the Catholic faith, to help them prepare to receive the sacraments and to pray with them. When she led the Way of the Cross in the hospital chapel as many as 40 patients would attend.

Sr. Marta had the unusual gift of helping people to be reconciled with God. No one in her department died without first receiving the sacrament of reconciliation. Often Jewish patients under her care would ask to be baptized. For Sr. Marta all of her patients were equally important, regardless of whether they were Polish, Ukrainian, Jewish, Orthodox or Catholic. She served all of them with the same love, drawing strength for this from her deep prayer life.

Just as the life of Sr. Marta abounded with acts of selfless love, and so too did her death. During an epidemic of typhoid fever a young man, who was a nurse and a father, was given the dangerous duty of disinfecting the room of a person ill with typhoid. Seeing this man’s fear for himself and his family, Sr. Marta volunteered to take his place. This generosity would cost her her life. She came ill with typhoid. As she lay dying, everyone who knew her prayed for her recovery. Even Jews from the local synagogue held a special prayer service for her. Those with her at the time said that she was in ecstasy after receiving her Lord in Holy Communion for the last time. Sr. Marta died on 30 May 1904 in Śniatyn.

At the time of her death Sr Marta was, to the many people who knew her, a very special person. Time has proved that they were right. People of all ages, nationalities and confessions came to visit her grave. And they still come today, convinced that she will help them in their difficulties. And often they are rewarded for their trust in her help with an answer to their prayers. 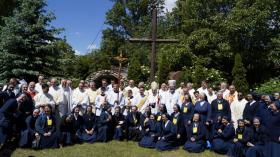 The Vincentian Family organizes a pilgrimage to the tomb of the Blessed Martha Weicka in Sniatyn the eighth year consecutively. More than 1000 pilgrims came on May 27-28 to pray and ask for the grace with the patronage of the Blessed.