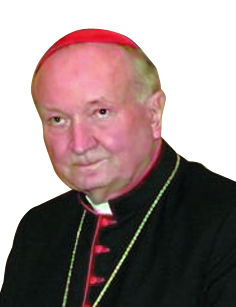 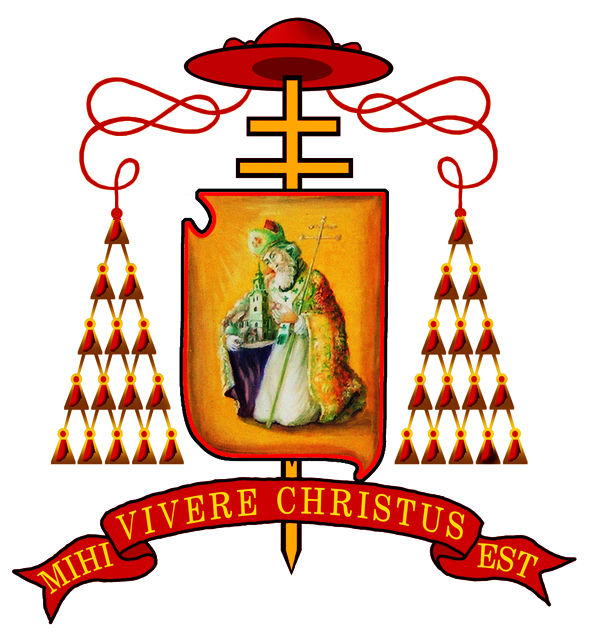 His Eminence Cardinal Marian Jaworski is the forty-fourth Archbishop-Metropolitan of Lviv of the Latin Rite and the first Cardinal among Latin Archbishops of Lviv.

The Cardinals of the Holy Roman Church make up a special board, which, under the provisions of a special law, has the right to vote for the Bishop of Rome. The Cardinals are also at the Pope’s service, either acting collegially, or summoned to help deal with important cases individually. They are responsible for performing different functions and helping the Bishop of Rome, especially in the daily care of the Ecumenical Church (CIC 349).

Cardinal Presbyter Marian Jaworski is the retired bishop of the Lviv Archdiocese of the Roman Catholic Church. His Eminence is also the forty-fourth Archbishop-Metropolitan of Lviv of the Latin Rite and the first Cardinal among Latin Archbishops of Lviv.

Childhood and youth
21.08.1926 – born in Lviv in the family of Wincent Jaworski and Stanisława Łastowiecka. Was Baptised in the church of St. Anthony of Padua in Lviv and was named Marian Francis.
1945 – after finishing high school, he entered the Lviv Seminary. However, due to the political situation, Marian was forced to continue his studies in Kalwaria Zebżydowska, Poland.

Priesthood
25.06.1950 – consecration was administered by Archbishop of Lviv, Eugeniusz Baziak, in Kalwaria Zebzhydovskiy; First Divine Liturgy was held in the church of St. Clement in Zawoja.
1950-1952 – served as a Vicar of the Basznia Dolna parish near Lubaczów
1952 – became doctor of theology of the Jagiellonian University of Krakow; thesis: "Development of the views of Joseph Hayzer on the principle of reason. Critical study”.
1952-1954 – served as a Vicar of the Poronin parish
1954-1965 – continued his studies at the universities of Lublin and Warsaw
1955 – Ph.D., Catholic University of Lublin; thesis: "Aristotelian and Thomistic heory of acting reason against the background of the concept of being"
1956-1958 – Archbishop Eugeniusz Baziak’s Chaplain, taught at several dioceses and religious seminaries
1961-1967 – worked as a lecturer at the Faculty of Philosophy of the Christian Catholic University of Lublin
1965 – Habilitation in philosophy of religion at the Academy of Catholic Theology in Warsaw based on scientific achievements and scientific work on the topic "Religious knowledge of God in the novels of Romano Guardini";
1967 – lost his left palm as a result of a railway accident, which took place not far away from Działdowo 1970-1984 – as Secretary of the Scientific Council of the Episcopate of Poland Marian Jaworski contributed to the renewal and organization of theological faculties throughout Poland and sought their recognition by the state authorities
1974 – Canon of the Archicathedral chapter in Lubaczów
1974-1982 – Dean of the Pontifical Theological Faculty in Krakow; appointed professor надзвичайний, and then the звичайний usual
14.12.1976 – Honorary Prelate of Pope Paul VI
1982-1988 – the first rector of the newly established Pontifical University of John Paul II in Kraków
Episcopat

21.05.1984-16.01.1991 - Titular Bishop of Lambaesis (a Roman province Numidia, now - Algeria) and Apostolic Administrator of the Polish part of the Lviv Archdiocese with residence in Lubaczów

23.06.1984 – was consecrated in the Wawel Cathedral by Cardinal Franciszek Macharski, Archbishop of Kraków, together with Metropolitan Archbishop of Wrocław Henryk Gulbinowicz and Bishop Jerzy Ablevicz from Tarnow

1987 - Member of the Pontifical Council for seminaries and Catholic universities

01.16.1991 - Appointed Archbishop Metropolitan of Lviv of the Latin Rite by John Paul II; takes care of the newly established Lviv Theological Seminary, setting up the infrastructure of Catholic churches; held a synod of the Lviv Archdiocese and Lutsk Diocese aimed at the revival of religious life in the spirit of the Second Vatican Council

05.18.1991 - Enthronement in Lviv Metropolitan Basilica where the Archbishop ordained two priests (Josyp Mychailivsky and Andrzej Buczyński) and a deacon (Andrzej Zayaczkivsky) for the first time after World War II.

1996 – a member of the Roman Congregation for Catholic Education

1-23.10.1999 - attended the Second Special Assembly of the Synod of Bishops for Europe, Vatican City

21.02.2001 – was declared a cardinal presbyter of the titular church of St. Sixtus in Rome

23.10.2001 – Headed the State Committee in Affairs for Protection the State Border of Ukraine. Was awarded a medal `For conscientious service in the frontier troops of Ukraine` by B. Oleksiyenko

27.12.2001 – received an achievement certificate from the President of Ukraine Leonid Kuchma: ‘I would like to express my sincere appreciation, Your Eminence, for your hard work and personal contribution to the spiritual development of the Ukrainian state’

2005 - during the final hours of John Paul II’s life administered the Sacrament of the Anointing of the Sick; participated in the conclave which selected Pope Benedict XVI

08.06.2006 - Honorary Doctor of the Pontifical Theological Academy in Krakow

19.08.2006 - President of Ukraine Viktor Yushchenko signed a decree on awarding Cardinal Marian Jaworski the Order of Yaroslav the Wise of the fourth degree on the occasion of his 80th anniversary and for his significant personal contribution to the establishments of the ideals of spirituality, charity and accord in society, and his many years of theological activity
10.10.2006 - Honorary Doctor of the Pontifical Theological Faculty in Wroclaw for his significant contribution to the emergence and development of the Polish phenomenology, for detecting the role of sacrum in the creation of the human у творенні людського простору сенсу; for his concern for the promotion of staff members and studies of students, as well as awarding academic status to theological schools in Poland; for the contribution to the revival of religious life in the East and to reconciliation and cooperation between Ukrainian and Polish peoples; as to a representative of the priests of the Lviv Archdiocese who in the postwar period created church structures in western Poland, particularly in the Diocese of Wroclaw

21.02.2008 – was awarded the Commander`s Cross with Star of the Order of the Rebirth of Poland for outstanding achievements in theological and teaching activities, as well as for pastoral ministry in Lviv Church (Regulation of Polish President Lech Kaczynski of 17.09.2007)
21.10.2008 - Pope Benedict XVI accepted his resignation as archbishop
22.11.2008 - officially hands over the power to his successor, Coadjutor Archbishop Mieczysław Mokrzycki
2008 - Retired Bishop, resident of the Krakow Archdiocese
2009 – was awarded the Bene Merenti Medal of Polish Theological Society

Awards:
By the order of January 19, 2017 "in recognition of his outstanding contributions to the reconstruction of religious life in the Eastern Borderlands and deepening of ecumenical dialogue, for scientific achievements in the field of philosophy and theology", President Andrzej Duda awarded him with the Order of the White Eagle. Earlier, by the decision of President Lech Kaczyński of September 17, 2007, he was awarded the Commander`s Cross with the Star of the Order of Polonia Restituta. In 2006, the President of Ukraine, Viktor Yushchenko, honored him with the Order of Prince Yaroslav the Wise of the 4th class, earlier in 2002 he was awarded the same order of the 5th class by President Łeonid Kuchma. In 2016, he was awarded the Gold Medal for Merit to Culture - Gloria Artis (the medal was decorated in 2019).

He died on September 5, 2020 in Krakow. On September 11, 2020, after the funeral mass in the Basilica of Our Lady of the Angels in Kalwaria Zebrzydowska, he was buried in the crypt of the chapel of the miraculous image of Our Lady of Kalwaria.