St. Benedict and St. Scholastica - twins born in Italy, in Nursia (480-547 gg.) Their life in his "Dialogues" describes St. Gregory the Great.

In 529, on Mount Monte Cassino, St. Benedict wrote the Statute, which is based on the Gospels and is the basis of the monastic life not only of the Benedictine order, but also of many other orders. As a Reformer and Patriarch of monastic life, he managed to give it a certain direction and approved it with his Statute, in which he pointed out not only the importance of prayer but also work, emphasizing its dignity and interpreting it not only as a means of maintenance but also as service to God and people. . For St. A harmonious combination of work and prayer was very important to Benedict.

Beginning in the seventh century, the Benedictines brought to Europe not only Christianity but also civilization, which reflects the famous saying: "Cruce, libro et atro" - "Cross, book and plow." Benedictine monasteries soon appeared throughout Europe, with Western monasticism flourishing.

In the East Slavic lands, the first appearance of the Benedictines dates back to the VII century. These were Irish missionaries who set foot on these lands before the official Baptism of Kiev Rus. Later, around 977, at the request of Prince Yaropolk (nephew of St. Olga), Pope Benedict VII sent ambassadors to organize the first monastery, headed by Bishop Bonifazio. These were the Benedictines, the first to establish a Christian diocese in Kiev Rus. This mission did not last long, until 979. It is possible that the reasons for the beginning and end of this mission were economic and political - the establishment of relations between Europe and Byzantium.

In 1616 there was a Benedictine nunnery in Lviv. The school at the monastery was the first educational institution for women in these lands. The nuns were mainly engaged in the education of girls of the nobility. In Soviet times, the monastery premises were used as a warehouse, and educational institutions were located on its territory. Now the monastery complex belongs to the Congregation of the Studite Sisters (Greek Catholic Order) and is called the "Church of All Saints and the Monastery of the Intercession of the Blessed Virgin". The monastery has a school of St. Sophia.

In 2016, on the initiative of the Archbishop of Lviv Metropolitan Mieczysław Mokszycki, started the construction of a new Benedictine monastery of St. Joseph. And on June 4, 2020, the Metropolitan of Lviv consecrated the cross prepared for the church tower. And so, on March 19, 2021, was the consecration of the church of St. Benedict and the monastery of St. Joseph, as well as the bell for the tower, which calls for the common glorification of the Lord. Thus, for the first time in its post-war history, the Lviv Archdiocese once again has a contemplative monastery.

Charisma:
At the heart of Benedictine life is prayer, which binds everything together and gives meaning to all other actions. St. Benedict did not demand a special vow of prayer from his disciples, because he expected it to be at the center of their lives and to penetrate everything that they did not do. Prayer is Opus Dei, the work of God, and nothing can be placed above it. The true vocation of the monk or nun of the Benedictine family is not to fight activity in favor of contemplation, but to restore the original harmony between them. Life in the Benedictine Order is life in the School of the Lord`s Service. Every nun realizes with her life the motto of the Founder "May the Lord be glorified in all things!" This means that all spheres of life, individual and social, are filled with the desire to put nothing above Christ. The Order consists of five Promises: obedience, poverty, purity, conversion, and permanence. The family atmosphere of common life is regulated by the Statute and the Ordinary. Gregorian chanting and recitation of psalms during the common liturgical prayer are the main responsibilities. The abilities and gifts of each nun, as well as the needs of the community, determine the variety of responsibilities. Each work must be performed specifically, honestly, in detail and carefully. The kind of work is not essential, as is its external fruitfulness, the internal fertility is important, which arises from faith and from a deep connection with the Lord.

Motto:
Perhaps the most famous Benedictine mottos are the Latin expressions "Ora et labora" - "Pray and work" and "Ut in omnibus glorificetur Deus" - "May the Lord be glorified in all things", as well as "Pax!" - "Peace!". These mottos characterize the attitude of members of the Benedictine order to the daily duties of prayer and work. 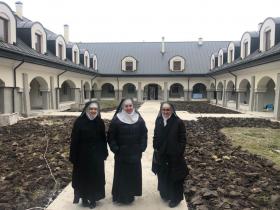 A new monastery in Lviv – support the beginnings

he initiation of the Benedictine presence in Ukraine

The spiritual path of sons and daughters of St. Benedict continues in Ukraine but only in the abbey of nuns in Zhytomyr. There are no Benedictine monks, and until recently there was nothing to indicate that there would be, especially during this time of pandemic when no one thinks of beginning a new monastic foundation. But unexpectedly, an all-changing sign appeared.